Bioregions connects forward-thinking regions across Europe to work together to unlock regional potential through international exchange on the forest circular bioeconomy. In this initiative, coordinated by the European Forest Institute (EFI), the three pioneer regions are Basque Country (Spain), North Karelia (Finland), and North Rhine-Westphalia, (Germany).

The launch event for the new Facility was held on 9 March in Bilbao, Spain, and attended by over 100 participants. The event was opened by the President of the Basque Government,  Iñigo Urkullu who highlighted the importance of having an economic model based on the use of biological resources and who stated the commitment of the Basque Government to improve and increase the use of renewable resources to overcome global and local challenges. EFI Director, Marc Palahí, emphasised that regions are key building blocks to unlock the potential of the bioeconomy and that, for EFI, this a an important and strategic initiative which will promote scientific cooperation between regions to set the bioeconomy in motion in Europe.

High-level representatives from the European Union and the three pioneer regions were joined by leading speakers from the fields of business, finance and research who all pledged strong support for the new Facility. Peter Wehrheim, Head of the Bioeconomy and Food Systems Unit of the European Commission’s Directorate-General for Research and Innovation noted that developing regionalised bioeconomy strategies offers a valuable approach to be able to more accurately identify synergies, win-win scenarios and trade-offs. Ulrika Landergren, Chair of The Commission for Natural Resources (NAT) committed support from the European Committee of the Regions in identifying new regions to join and Nick Lyth, CEO of Green Angel Syndicate called on all present to act now to save nature through investment and innovation in nature-based solutions.

Representatives from the three regions shared existing bioeconomy iniatives and future plans, declaring firm commitments to the new Facility and to working collaboratively with their co-members and those to join in the future. Hubert Kaiser described how the North-Rhine Westphalia forest strategy fits perfectly with a bioeconomy strategy; Risto Poutiainen and Harri Palviainen recounted how North Karelia will be 100% fossil free by 2030 and is proactively boosting the creation of new start-ups for bio-based industries; and Arantxa Tapia Otaegi of the Basque Country pledged strengthened investment for the bioeconomy and described how the environment and business development must go hand in hand. 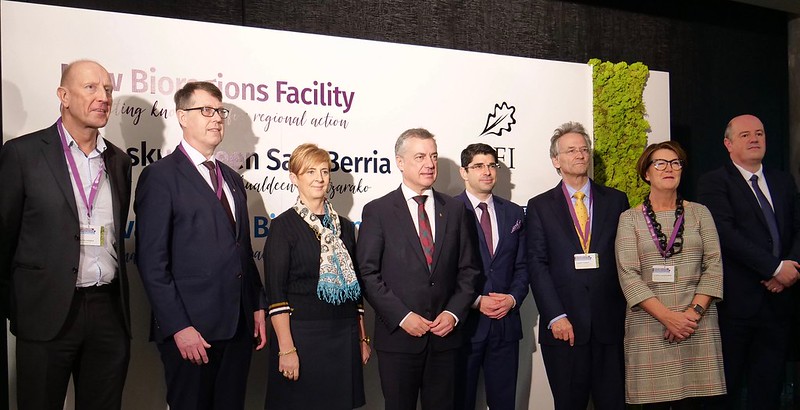 The event is the starting point to launch practical action and cooperation on a transformation towards a forest-based circular bioeconomy. In Europe, the bioeconomy employs more than 18.6 million people and has a turnover of 2.3 trillion euros, representing 9% of the whole European economy. The transition towards this economic model has already become a clear reality in some countries like Finland and Germany, while others, including the Basque Country, must and can move in the same direction. The potential for sharing experience, learning through cooperation and adapting successful action to regional specificities is the cornerstone of the Bioregions Facility, and more regions are expected to join in the near future.

The launch event which included a field visit to the Barazar forest and to Egoin sawmill was followed by an operational day in which EFI and the three pioneer regions began work on plans for joint strategies and actions, capacity building, partnering and exchanging experiences.

PyroLife 2023 Conference: the four axes of diversity of wildfire

The bioeconomy and non-timber forest products

EFIMED - November 16, 2022
Non-wood forest products – such as nuts, mushrooms, berries, resins, etc. – are crucial for the bioeconomy, ensuring the sustainability of forest...

The environmental impacts of a large-scale transition to timber cities

Silvopasture as key driver to promote circular economy in Europe

New videos explain the wonders of the pine ecosystems in Portugal...